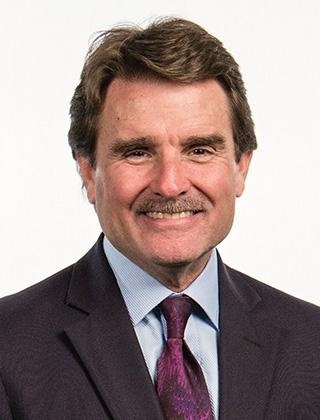 Dan Shugart's broadcasting career began in 1980 when fresh off of an extended stay in college he moved from Los Angeles to Pensacola. Dan took a part-time news reporting job at WBSR-Radio in Pensacola. That fall, he was the play-by-play announcer for the Pensacola Wings semi-pro football team, which led to his hiring at WEAR in March, 1981. He worked as a weekend sports anchor and general assignment news reporter until he was promoted to sports director in December, 1982.

Dan's interest in sports comes from his dad, an All-America basketball player at the Naval Academy. Like most Navy kids, Dan moved a lot as a child, living in Maryland, California (several tours), Rhode Island, Hawaii and Virginia. After graduating from high school in San Diego, he arrived at UCLA in time to witness the final two years of the great John Wooden basketball dynasty.

He played high school baseball and basketball, but upon reaching the age of reason (19), realized that his competitive career was behind him. So he turned to recreational volleyball and rugby in college. Volleyball, with its coed division, was a good idea. Rugby, which led to three knee surgeries, was debatable. His frenetic youth (ten homes in 17 years) carried over to his academic career, where he careened from a Political Science Major to Psychology, Philosophy, and finally settling into History after developing a deep interest in the subject, (and after the dean of students suggested it was time his career moved on). Defying all academic odds, he graduated from UCLA in 1979 with a degree in History

In addition to his duties at WEAR, Dan performed play-by-play for high school football games on WSRE-TV in the 1980s, when he covered Emmitt Smith, Derrick Brooks and the great championship teams of Pensacola's Golden Age. He freelanced for WSRE's broadcasts of PJC (now PSC) basketball and baseball; was the radio voice of the Pensacola Tornados pro basketball team for five years, called Tornados and Pensacola Ice Pilots hockey games on WEAR and called WEAR's broadcasts of Pensacola Blue Wahoos baseball games from.

He received the Southern League's Media Award in 2015, has twice earned the AP's award for the top story in Florida, and was cited by Special Olympics as Florida's broadcaster of the year, for his work with that organization; he has coached youth basketball and he joined his father with his election to the Pensacola Sports Association Hall of Fame in 2006.